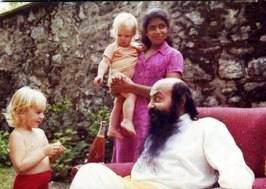 We don’t think about mothers as the greatest creative people on the earth. That is one of the reasons why women are not great painters and great poets – they need not be: they can be great mothers. Why does man try to become a great scientist, poet, painter, this and that? – he is jealous of women: he cannot create children. He feels impotent. Sigmund Freud has talked much about phallic Jealousy – that women suffer from a jealousy because they don’t have penises. Now this is utterly meaningless, absurd. It is as if a woman Sigmund Freud is born and starts talking about men suffering from breast-jealousy because they don’t have breasts.But, one thing is certain: deep down man always feels jealous that he cannot mother, that he cannot carry an alive life in him, that he cannot reproduce life. To substitute it he paints, he sculpts, he writes poetry, he composes music; he goes to the moon, he goes to Everest. He wants to prove at least to his woman that “I can also do something,” otherwise he feels impotent. Compared to woman’s capacity, he looks like a child, looks almost accidental. His work is not much: giving birth to a child, he simply triggers the process. A small injection can do that; that is not much of a work.

The woman passes through those nine months of agony and ecstasy. And then the work is not finished! In fact, then the work, the real work, starts – when the child is born.

And the child brings again a fresh quality to life. Every child is primitive, a barbarian; now the mother has to civilize. Every child is a barbarian, remember; he is animal, wild. And the mother has to give him culture, has to teach him the ways of life, the ways of man. It is a great work.You have to remember that – that your work has not finished, it has started. Take it joyously!

You are creating something immensely valuable – you are carving a life, you are protecting a life.

By helping this child to grow into a beautiful human being, into a buddha, you will be becoming the mother of a buddha. You will not be obliging the child: you will be simply enjoying your own life; your own life will become a fragrance through the child.This is an opportunity, a God-given opportunity.

And these are the two pitfalls: either you neglect the child, you are tired of it; or you become too serious about the child, and you start burdening him, obliging him.

Both are wrong. Help the child – but for the sheer joy of it. And never feel that he owes any debt to you. On the contrary, feel thankful that he has chosen you to be his mother. Let your motherhood bloom through him.If you can bloom into your motherhood, you will feel thankful to the child forever.And, naturally, there will be sacrifices, but they have to be made…joyously. Only then is it a sacrifice! If you do it without joy it is not sacrifice. Sacrifice comes from the word sacred. When you do it joyfully, it is sacred. When you don’t do it joyfully, then you are just fulfilling a duty – and all duties are ugly, they are not sacred. This is a great opportunity. Meditate over it, go into it deeply. You will never find such a deep involvement – in fact, there is none as it is between a child and the mother. Not even between the husband and the wife, the lover and the beloved – the involvement is not so deep as it is between the mother and the child. It cannot be so deep with anybody ever – because the child has lived in you for nine months as you; nobody else can live in you for nine months as you.And the child will become a separate individual sooner or later, but somewhere deep down in the unconscious the mother and the child remain linked.If your child can become a buddha, you will be benefited by it; if your child grows and becomes a beautiful human being, you will be benefited by it – because the child will always remain connected with you. Only the physical connection has been disconnected; the spiritual connection is never disconnected.

Osho – Walk without Feet, Fly without Wings and Think without Mind