Gratitude is the first key to a great life. 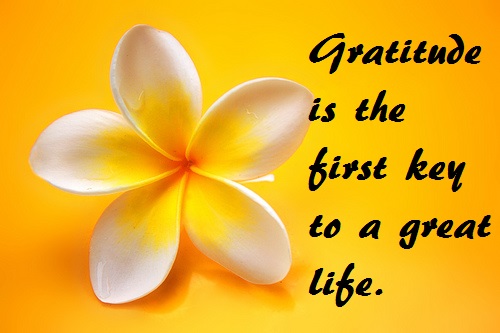 One person had everything. So he gave all to his only son too. He was not happy. All the time his son was full of anger and stress. He use to shout at servants and never took any reason. For him all his servants wanted to evade work. He always had complaints from food which was served to him and he did not like his school. He had started thinking that whatever is there, he deserves that and that anyway has to be there. His father had started getting worried about his 5 years old child's mental state but he did not know what to do. He did not want to withdraw his facilities but did not know what should be done. He was worried about his child's aggression too. To improve his thought process, we played a game with him. We got a beautiful hat and when child saw the hat, he wanted to own it. He could but there was a condition, we made it his gratitude hat. So to wear his hat, he had to thank all the things which he had. He did things by force initially but in few days, his attitude started changing. He started smiling and his aggression started disappearing. He started realizing the value of things he had. We had to bring gratitude in his life for him to be happy.

He was a 5 years old child so a game helped him. But we all have same attitude and doe snot matter how much we have in our lives, if we are not happy and grateful about what we have, we cannot be happy. We would always feel there is something missing in my life and its not something which is missing externally. It is missing something internally. So you need to fix it internally. All the time we keep asking for more and more and we keep ignoring what is already there. We want more things from parents and we forget to see what they are already doing. We want more from our husband/wife but we forget what the other person is doing. We want more from employer but we forget what is being done and how the things are managed. We want more from God but we forget what is already being there. However, the moment we realize what is already there and we start feeling grateful for that, we start becoming unhappy. We are unhappy because we see what is not there. We become happy when we see what is being there. If we are not grateful for what is being there we can never be happy. And do you want to know a secret? We already have everything its just that we haven't realized that. Or else we would not have been surviving  Its like a father would give everything to his child. Same way, whatever we need for our growth and life, we are given. So be grateful for what you have. You would always be happy.