More than I heard the guided tour, I heard his silence. He was polite in his manners. So poised and composed, that normally anyone could miss out on the emptiness he carried with in.

Draped in a mono-color costume there were many monks roaming the premises. One could see a variety of boys and men, ranging from age as young as three years to as old as sixty years, staying under one roof. The attire was not clean, as if one set of clothes was used over and over, for days at a stretch. Some of the monks, the young ones especially, were wearing torn clothes, 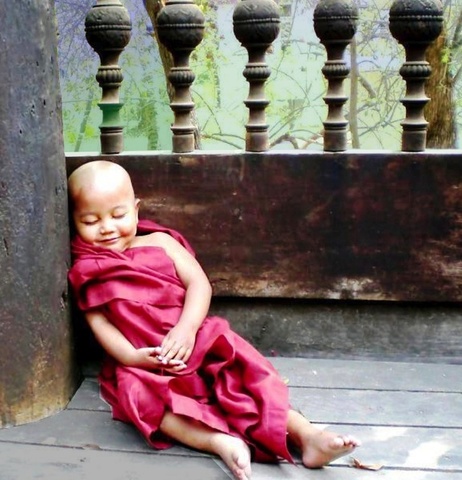 I wondered...what kind of parents have a heart so stoned to send their little ones away from their nest, to grow in an unfamiliar environment among strangers.

A glimpse of their face was enough to tell their stories of sadness and loneliness. Many of them did seem homesick. They were allowed to visit their families only once or twice a year. They had no excess to the world outside except for a few visitors like us. In winters even this interaction became impossible as the monastery and the roads to reach there gets covered in deep snow.

Unlike the life a few of them must have desired, they lived a life so disciplined that it not only took colors out of their life but also seemed to lock them in a no-smile zone. I hardly remember seeing the older ones smiling. For a fact, they understood the seriousness of the life they entered as a child's play in tender years.

Now sitting in my car, on our way to the next stop of our journey, his words kept playing in loop in my head; when he said, 'My parents sent me here when I was quite young. I had no choice'. He definitely missed his family I thought to myself. But would he still feel the same love for them that he felt years before! I doubt! For now he realizes the depth of betrayal from his own blood. Denying him the chance to choose his own destiny was too much for him to handle at the moment.

To me, as a parent, the whole incident dawned as an eye-opener. Since the day the baby is born, we become the remote control of her life. We get addicted to drive her crazy by deciding everything for her. Beginning from what to wear to what to eat to what subjects she should study in high school to even choosing her friends. We become so obsessed by living our dreams through our children that we forget they are individuals on their own journey. They seek our guidance not decisions!

It is hard to say how much time it will take for us, as parents, to unlearn the controlling patterns we have embedded deep in our flesh.

Meanwhile, I can bet that the monk we met today, had built some dream castles. Quite aware that his dreams may never be able to see the face of reality. He lived in a hope of tomorrow that may never come!

Out of the hundreds of monks who inhabited the monastery, meeting this one in particular, was truly fate.

Without saying much he taught me one of the greatest lessons of life - 'We cease to exist the day we stop dreaming!' How else could he stay so calm in a place he had never wanted to be in!