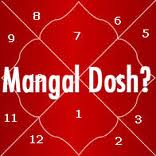 Mangal is known as Angar .In South India it is called Kuja.  'Kuja' means 'burning coal'.  Mangal is called 'Bhumi Putra also. In Planetary Cabinet Mars is in the role of commandar.  It is protector.  It represents human charecteristics which are controlled or formed by fiery elements or emotions e.g. courage, strength, bravery, victory, will power, firmness, impulsiveness, sexual desire, passion, determination, etc.But these are characteristics of pure Mars. In bad condition, it becomes negative  and makes native notorious.

Mangalik Dosha is formed when Mars  is placed in the 1st,2nd, 4th, 7th, 8th, 12th house from the lagna (ascendant ) and  Chandra lagna (moon sign). If Mars is placed in any of these 6 houses, it gives aggressive tendencies to either the person or the spouse. In certain cases if Mars is malefic to the native, it also gives danger to life, provided that other bad combinations are also present. Delay in getting married, difficulties in marital life, continuous fight between couple, divorce ,separation are the effects of mars  in these houses.

The presence of Mangal Dosha or Kuja Dosha is one of the biggest fears or misconceptions in our society. Even the various old texts of astrology differ about the Mangal Dosha. However, Mangal Dosha cannot be ignored. So, before marriage it is very essential to match horoscopes for Kuja Dosha. It is also very important to analyse the chart and identify whether the kundali has a Mangal Dosha or not. But these are very broad guidelines. Many other aspects and angles need to be studied. The overall strength of the horoscope, strength of the planets, benefic aspects, and Mars' strength must be considered.