Get ready for Shift Time! Cosmic energy is creating some major energy portals from now until the end of June.

We have an Annular Eclipse  & the significance of this Eclipse is further enhanced by the exact conjunction of the Sun and Moon with the Pleiades Star System (also known as the 7 Sisters)… this rare alignment will take place in the Cosmos, after a 26,000 year period!

A powerful beam of Light will emanate from the Galactic Central Sun, descend directly through the Pleiades towards the Earth and will be grounded along the path of totality.

THE PLEIADES – SEEDING THE NEW CONSCIOUSNESS

This well known cluster of stars, above Taurus, has held a significant position in world mythology throughout the Ages. To the Maya, the Pleiades represent the handful of maize seeds from which the original humans were born. These seeds are symbolically re-planted in the Earth at the beginning of each new ‘Sun’ cycle of 5,125¼ years. 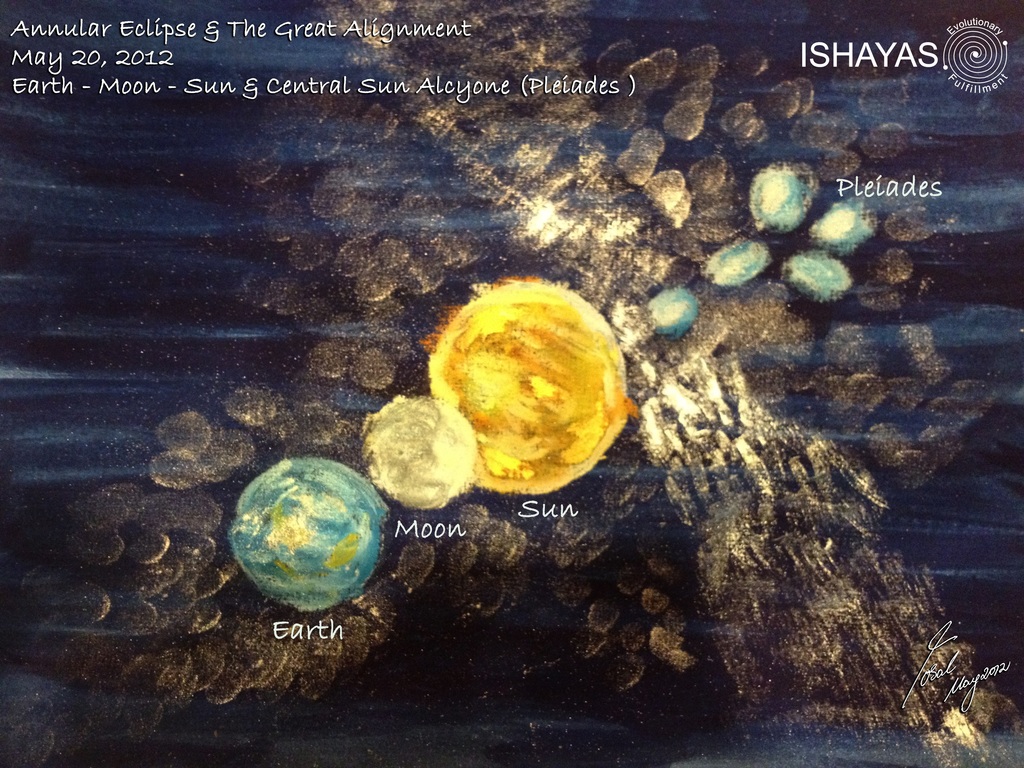 The mystic ‘Pleiades’ is the constellation responsible for our spiritual evolution & ascension.

Some may be experiencing upheaval prior to this alignment... these are days of transformation. Days of emptying out & unlocking frequencies, to open up and receive the gifts coming our way...

SIGNIFICANCE OF ENERGY PORTALS IN MAY & JUNE 2012

May 05, 2012 – Wesak Supermoon! Activated this rare window of time preparing us for the upcoming energies

June 6 - Venus Transit - Integration with the Sirian and Pleiadian Alliance, the full return of the Golden Dolphin energies, the initial integration of Divine Feminine to Divine Masculine

Eclipses mean changes, good and everything in-between. Eclipses always escort in significant events – They intensely magnify and are living parenthesis forcing us to look at what we have turned our heads away from.

These are very powerful Eclipses each with their own gifts and own set of rules.

May 20, 2012 Solar Eclipse is an ANNULAR ECLIPSE, which means that the Moon is positioned further away from the Earth than at a Total Eclipse, so it does not completely obscure the Sun, but leaves a ring (annulus) of sunlight visible around the Moon’s dark disk.

This Eclipse on May 20, 2012, marks the ‘point of no return’ on our journey towards the December Solstice 2012. The more we are each able to release emotional attachments, thoughts and ideologies that hold us back from experiencing full conscious awareness of our connection with the Oneness of all Life, the smoother the transition will be for us. The May Eclipse brings a golden opportunity to create Right Relations in all aspects of our lives and stand fully in the power of who we truly are and what we truly believe.

This eclipse contains the potential of deep cleansing of the soul.

THEIR EFFECT ON THE EARTH’S LEY LINES

Solar Eclipses have a profound effect on the Earth’s subtle energy grids and ley lines. All powerful events that occur on Earth leave energetic memory imprints in the Earth’s energy grids. Powerful negative imprints, such as war, misuse of power or emotional trauma can block or damage the energy flow in a particular region of the planet, causing the energy to become distorted.

These can become amplified and perpetuated by the energy flow through. Eclipses provides opportunities to release these negative energy imprints and enable new, positive patterns to become encoded into the Earth grids.  As an Eclipse shadow passes overhead, the Earth’s subtle energy lines power down to almost nothing, becoming indiscernible to dowsing; then as the Sun’s light returns, the grids spring back into life. This is a bit like deleting an old computer program, loading a new one, and then re-booting the system. Annular Eclipses have a very subtle effect on the energy grids, releasing, transforming and healing the etheric energy ‘blueprint’ that can enable new spiritual archetypes to emerge into collective consciousness.

They are like the two primary acupuncture ‘meridians’ of the global energy system, similar to the two main yang and yin acupuncture meridians in the human body – the Governor Vessel and the Conception Vessel.

Everything else in the Earth’s energy grids is fed by these two vast circulating reservoirs of spiritual life-force energies.

Releasing the Past – Seeding the Future

The eclipse on 20th May is a South Node eclipse, which will release the energetic ‘thought-forms’ and patriarchal archetypes of at least the last 5,125¼ years, and probably the last 25,626 years of the Galactic Great Year.

The Eclipse will release negative imprints left from the misaligned expression of male power in the Pacific Ocean grids, and along the entire length of the Plumed Serpent – Great Male Dragon line, as it encircles the Earth. So, it will affect the consciousness of the whole planet.

While the old patriarchal patterns of the last 5125¼ years are being released by the Eclipse, hidden behind the eclipsing Sun, the Pleiades will be planting the seeds of the new consciousness that will begin to birth the new 5125¼ year cycle, that begins after 21st December 2012, as the Solstice Sun emerges from the centre of the Galactic Equator, which the Maya perceived as the ‘womb of Creation’.

LETTING GO OF GENDERS, ALIGNING TO OUR ‘I AM’ SOUL PRESENCE

Through the influence of these May-June celestial alignments, monadic level energy will catalyze an instant evolution of consciousness in the spiritually awakened... to spawn a quantum leap of the entire four-body system in a potential quickening that far surpasses any initiatory process ever experienced in the history of human evolution on Earth.

This New Moon Solar Eclipse is setting into greater momentum a new expression of a unified male-female power that is fully aligned with the Divine Will and Love-Wisdom aspect of Mother Father God.

With this comes healing and transformation at both a personal and global level including grand scale release of abusive control patterns, sexual dysfunctions, karmic patterning and negative imprints left from the mis-aligned expression of both masculine and feminine domination.

The Natives believe this Pleiades-Sun allignment may have a direct connection with Quetzalcoatl, the feathered serpent that came to bring a greater wisdom to the planet.

Many Natives & Tribes around the world including - The Mayans, Egyptians, early Dakotas,  Hopis, Navajos, Iroquoi & the Cree among others, revered the Pleiades and some believed to be their descendants on the Earth.

May 2012 is an exceptionally powerful month, and with all of the challenges going on in people’s lives, it is a real opportunity for us to make a positive difference for people everywhere.

During this next 30-day period, there will be wondrous Celestial Alignments (which have been highlighted above) due to which we are potentially experiencing the most powerful surge of transforming energy in known history as a quantum galactic gateway opens to unleash higher-dimensional energy triggering a greatly accelerated shift of consciousness.

Our expanded human and planetary design is being alchemically reconstructed by these incoming light encoded frequencies which are anchoring the foundational overlays of multi-dimensional templating within the physical plane, ushering in the next stage of DNA activation and energy blueprint configuration.

Allow yourself to detox for the next 2 days. On Sunday, sit in quiet meditation, or in a relaxed space with the intent to receive the new energies and activate the new consciousness in your awareness .

Visualize a blue shaft of light coming from the Central Sun into you and going thru you into the core of the Earth. Anchor the new energies in Your Being and in GAIA.

No-where to go, No-thing to do,

As the path from Karma to Kriya, unfolds,

With every breath, in the depths of Stillness…

Let’s get ready to ride the Cosmic Surf on Earth! :)

Sunshine, Moonshine, Pleiades twinkles and lots of stability to Earth!