Hand’s down, one of the most popular questions…

Master Facilitator As more of your light shines why does it feel more needs to be cleared?

"Imagine that you have a room or warehouse where for years you have been storing your things and it is lit by a 40 watt bulb. Change the bulb to a 100 watt bulb and you will see what happens. You will see the mess and the dust you didn't think existed. The dirt will be clearer." So sometimes when more of your light is shinning you can see more of the dirt ♥ Do you blame and judge yourself for the smallest of mistakes?
“How could I be so stupid? What was I thinking? Why didn’t I take care of myself months ago? Why did I get into that relationship? How could I be so dumb to make that mistake? I’m so angry with myself!”

If you do this often, then you run the risk of exacerbating your distress by constantly…

How did you get involved with tarot? Where did your interest for tarot come from?

I first saw and "played" with tarot cards when I was 12 or 13 years old. The decks' colorful images intrigued and were somehow familiar to me but I didn't have information as to what they were until years later. That…

Off late i have been wondering about all the new age courses that have come up relating to mind, body , atma, light body etc etc etc. It seems to me that every person is trying his best to ASCEND and make the best use of this time. But sometimes i get a little worried when people (so called Experts in the field) teach or make you practice some hard-to-understand techniques where in ultimately you feel a lot more exhausted mentally but at the same time the THIRST for which you were practicing… 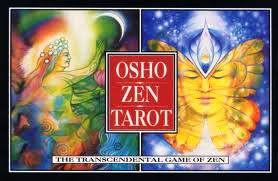 The Transcendental Game of Zen…

Thoughts are the products of our mind.As we think, so we react and so we become.Positive thoughts give way to positive action leading to a better life.It also means intelligent thinking and healthy eating which can lead to healthy living.A positive person has a peaceful aura which emanates happiness and joy to all who come in contact with him.If all of us will have positive thoughts and positive actions then we can definitely make earth a better planet to live.So lets take a pledge in this…