Conscious Water Crystals: The Power of Prayer Made Visible 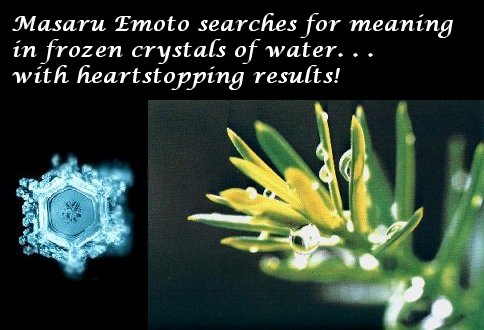 The image above shows a frozen crystal of pure water--
a bright, radiant hexagon. But in response to human thought
and emotion, water crystals can take many forms. . .

Evidence is clear that we really can heal our Mother Earth through intent, love, and the action of scientific prayer. But one other ingredient is crucially important. That ingredient is belief.

And since a picture is worth much more than any number of words, we sought to show you the simplest and most convincing pictures that we could find, demonstrating how our thoughts, words, and feelings affect so-called physical objects, right down to the molecular level.

The pictures and discussion in this article represent the brilliant work of Japan's Masaru Emoto. The photos have been published in a gorgeous book called The Messages of Water (see Books). If you still doubt that your thoughts impact the world around you, viewing Emoto's work will erase this doubt forever.

The first four pictures are courtesy of Rebecca at DolphinSwim, http://www.seaswim.com. The rest were captured directly from Emoto's book.

Emoto has been conducting worldwide research on the effect of ideas, words, and music upon the molecules of water, and the descriptions below are taken from the book of his published results.

The photo on the left is of a frozen water sample from the lake at Fujiwara Dam, in Japan. As you can see, the water's structure is dark and amorphous, with no crystalline formations.

After the above water sample had been taken, the Reverend Kato Hoki, chief priest of the Jyuhouin Temple, made a one-hour prayer practice beside the dam. After that, new water samples were taken, frozen and photographed. As you can see (at right), the change is stunning--the ugly blob of the former sample has become a clear, bright-white hexagonal crystal-within-a-crystal.

The third photo shown here, also of water taken from Fujiwara Dam after the prayer treatment, reveals a shape that had never, prior to that time, been seen by Masaru Emoto in his over 10,000 water-sample experiments. As you can see, it is a heptagon, or 7-sided crystal.

Rebecca at DolphinSwim tells us:

"Reverend Kato explained that during his hour-long prayer vigil he was invoking the spirits of the Seven Benzaiten: the Goddesses of Fortune. You'll also notice that this photo displays the color gold, not white."

At left, for comparison purposes, is a representative photograph of "untreated" distilled water. Different samples of distilled water showed different formations, but none were crystallized. Then this water was treated by taping words or people's names to the bottles, playing music to them, or exposing them to floral essences. One interesting result was that there was a language difference. For example, "Thank you" in English evoked different crystal formations than the same sentiment in Japanese. Here are some other effects that Emoto claims to have found in his research:

Of great interest for healing and just day-to-day well being is the extreme effect upon water crystals of negative words and ideas. When the words "Adolf Hitler" were taped to a bottle of distilled water, the results seen at left were obtained.

Another instructive set of pictures showed the amazing difference between the crystalline patterns evoked by the words "Let's do it" and the patterns produced by "Do it!" The "Let's do it" crystals were like beautiful snowflakes. The "Do it!" water did not crystallize at all.

Sometimes, when we cannot see the immediate results of our prayers and affirmations, we think that we have failed. But, as we learn through Masaru Emoto's amazing photographs, that thought of failure itself becomes represented in the physical objects that surround us. Now that we have seen this, perhaps we can begin to realize that even when immediate results are invisible to the unaided human eye, they are there. When we love our own bodies, they respond. When we send our love to the Earth, she responds.
For our own bodies at birth are 70 percent water, and the percentage of water in our bodies remains high throughout life (depending upon weight and body type). Also, the earth's surface is 70 percent water. And now we have seen before our eyes the proof that water is far from inanimate, but is actually alive and responsive to our every thought and emotion. Perhaps, having seen this, we can begin to really understand the awesome power that we possess, through choosing our thoughts and intentions, to heal ourselves and the earth. If only we believe.
Sources: http://www.spiritofmaat.com/archive/aug1/consciouswater.html