Anxiety is a deep problem... The problem is schizophrenia. ~OSHO~ 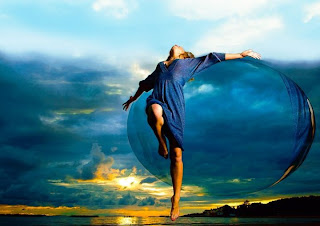 You don't know how to do a thing totally, and this is THE BASIC MADNESS OF HUMANITY: everybody is divided.
DIVIDED, HOW CAN YOU ENJOY? Divided, how can you celebrate? One part of you goes on against you continuously -- as if one of your legs goes to the right and the other leg goes to the left. You are standing on two boats which are moving in different directions, diametrically opposite. THIS IS YOUR ANXIETY.
So many people come to me and they say, 'HOW TO GET RID OF ANXIETY?' They don't know what this word 'anxiety' implies. They think that something like transcendental meditation will do: just by chanting a mantra their anxiety will go. They are simply stupid. Things like transcendental meditation have appeal because of the stupidity of people -- because they are in search of shortcuts, something easily done... like instant coffee: you do it -- finished!
ANXIETY IS A DEEP PROBLEM. The problem is schizophrenia. You are divided, CONSTANTLY FIGHTING WITH YOURSELF. You are two, not one, and this tension creates anxiety. Now, this repeating of a mantra is not going to be of any help. It may give you a little deeper sleep, it may help you to be a little more together, but it is not going to help far enough. Your division remains, and sooner or later again you realize that now the trick is not working.
The schizophrenia has to be dropped in a deep understanding. DON'T FIGHT WITH YOURSELF. And always remember that the top-dog is wrong. Always remember that the natural is truer. WHENEVER THERE IS A CONFLICT, FOLLOW THE NATURAL. If there is a conflict between love and celibacy, follow love -- and go totally in it. I know one day celibacy arises, but that comes out of a deep experience of love. Brahmacharya arises, but this is the flowering of profound love -- love felt so deeply it becomes brahmacharya; it becomes innocence, it becomes virginity.
VIRGINITY HAS NOTHING TO DO WITH THE BODY; it has to do with profound love. You call a woman virgin because she has not made love yet. I don't call her a virgin. I CALL A WOMAN VIRGIN WHO HAS TRANSCENDED LOVE; who has loved so deeply that the very depth has become a transcendence.
I CALL A MAN VIRGIN WHO HAS LOVED DEEPLY, and through love has become so one that now there is no need -- no need to depend on the other. He feels grateful towards the other because the other has helped him to become so independent. VIRGINITY IS NOT IN THE BEGINNING; IT IS IN THE END. Children are not virgin. They are just waiting to be violated.
I have heard:
"Three children were sitting on the steps of a home, and one child was playing with toy motorcars, another was playing with a spaceship, and the third was reading a glossy Playboy-type magazine. A man passed. He looked at the three children. He asked the first, 'What you would like to become in your life?' The first said, 'Of course, I would like to compete in car races. I want to become the greatest driver in the world.' The second said, 'I want to become an astronaut.' And he asked the third, 'What do you want to become?' He looked at the man and said, 'Grown up, sir. Grown up.'
CHILDREN ARE NOT VIRGIN. They are just waiting to become grown up. In fact they are worried why it is taking so long, why it is being delayed.
I was reading the autobiography of a poet, and when he was a child, he must have been about eleven, he came under the influence of a Christian missionary. And he became very impressed by the Christian doctrine that soon the world is going to end and Jesus will come, the second coming. But he became very much afraid. He started praying that, 'God, wait a little. Let my virginity be broken, violated. Wait a little! -- just two or three years more. Don't finish the world so soon!'
Children are not virgin. In fact, CHILDREN ARE NOT INNOCENT -- THEY JUST LOOK IT. They are getting ready to be corrupted. They are getting ready to move in the world.
REAL INNOCENCE COMES ONLY IN THE END. It is a flowering; it is not a seed. It is not the beginning; it is the end.
IF LOVE IS FULFILLED, BRAHMACHARYA ARISES. If you have lived totally in anger, compassion comes. If you have moved in life, suddenly you have a transcending experience. But the old religions, all of them have created a divided mind, a guilty mind, a crazy mind -- split.
OSHO
Nirvana: The Last Nightmare
Ch #1: Mastered by Zen